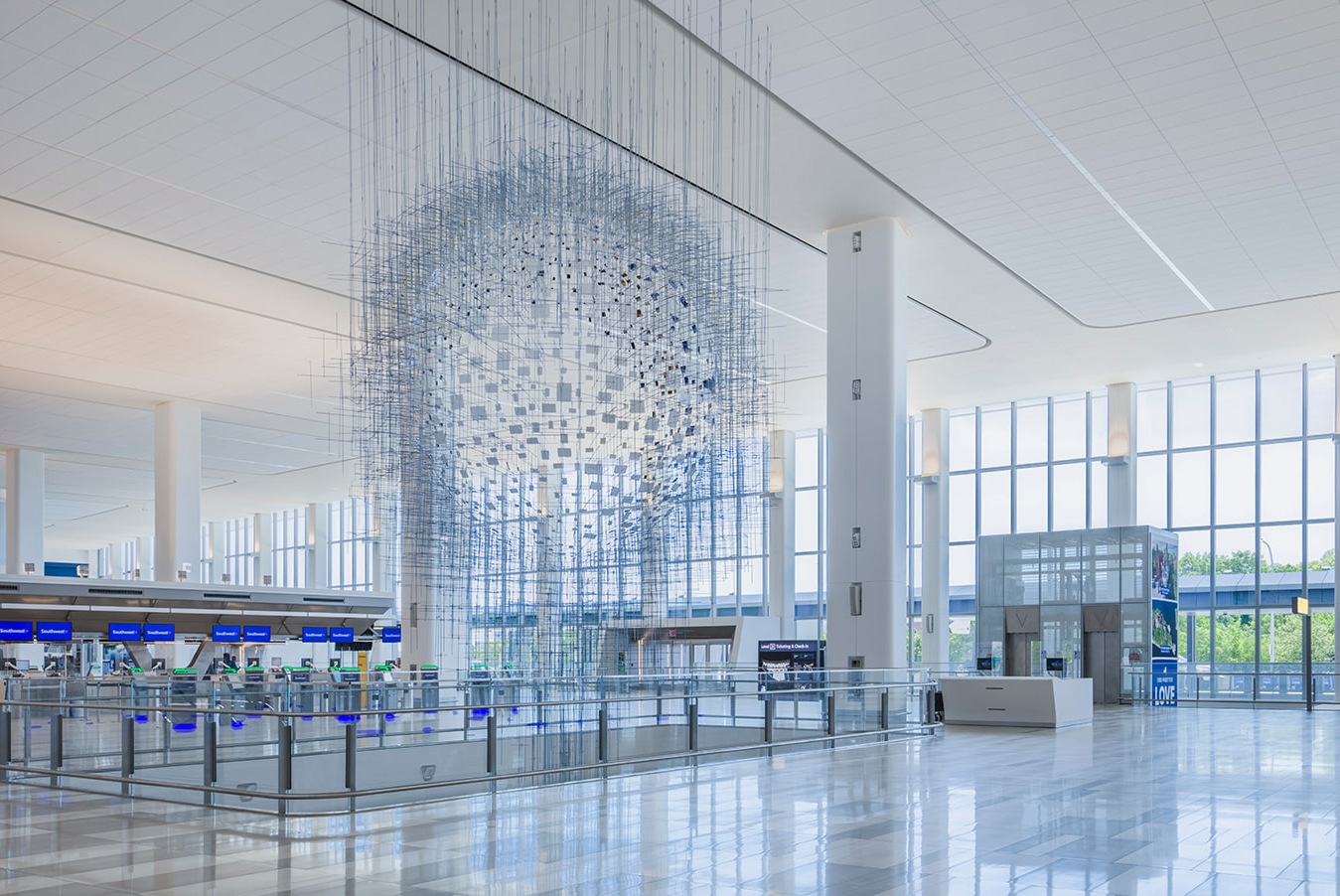 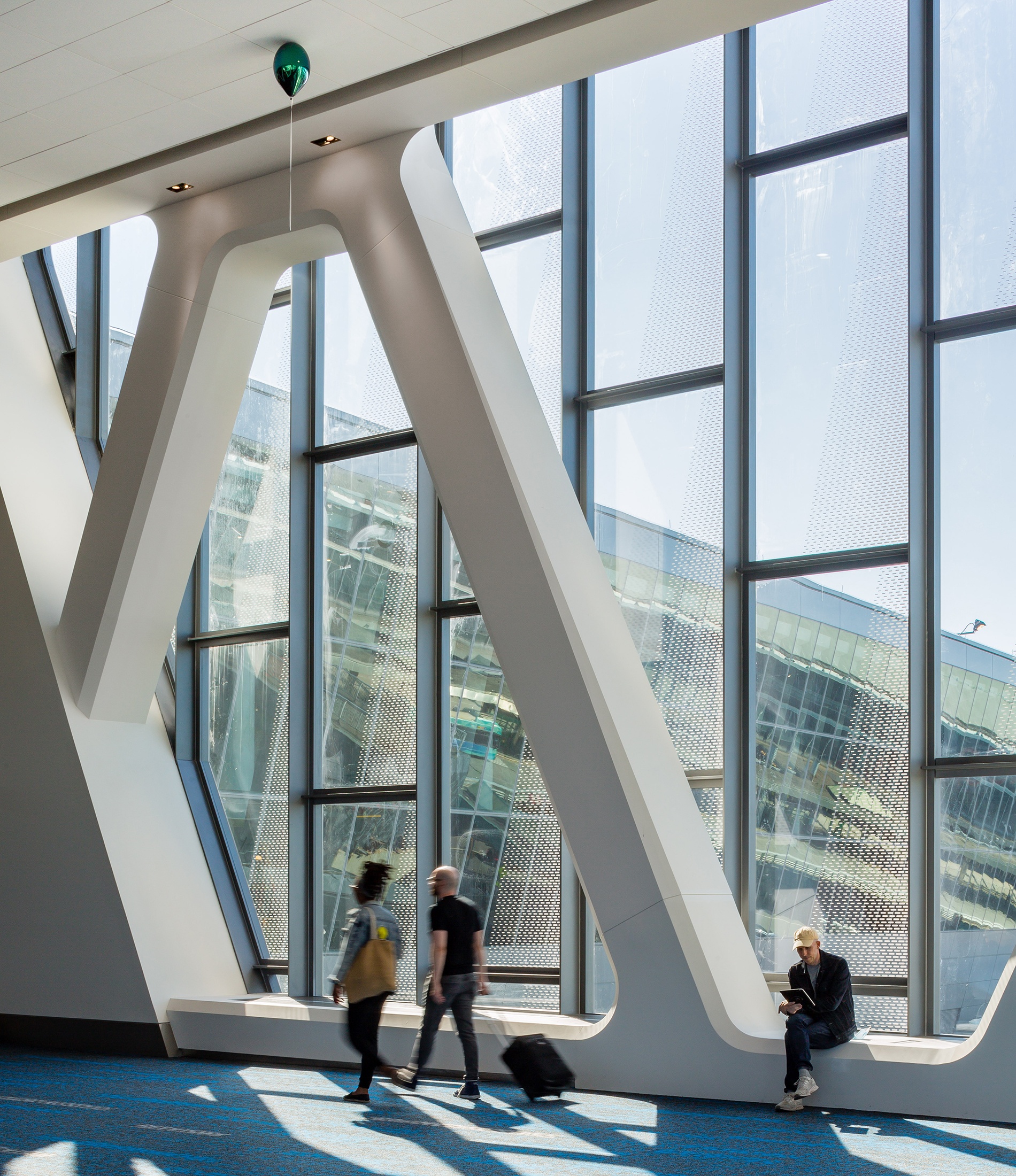 With the opening this week of the new Terminal B Arrivals and Departures Hall (also known as a headhouse), Governor Andrew Cuomo’s vision for a unified LaGuardia Airport is becoming a reality.

The facility, developed and operated by LaGuardia Gateway Partners (which includes Vantage Airport Group) and designed by HOK and WSP USA, carries that vision forward with a highly efficient yet adaptable terminal that transforms the passenger experience while paying homage to the architectural grandeur and individuality of New York City.

The four-story, 850,000-sq.-ft. facility houses passenger services and amenities, including airline check-in, baggage drop-off and pick-up, and security. These enhancements are supplemented by extensive food, beverage and retail options. The steel-framed terminal, with its linear, precisely articulated and dynamic form, presents a modern, cohesive face to both the landside and airside. It replaces a disjointed patchwork of structures with one that closely follows the curves of the Grand Central Parkway (GCP) and the airport access roads.

Connected to two island concourses by a pair of 450-foot-long steel truss pedestrian bridges, the headhouse serves as the nexus to the new Terminal B. From these transparent-walled bridges, elevated 65 feet above grade, arriving and departing passengers can enjoy panoramic skyline and airfield views as taxiing planes pass beneath them.

The bridges offer more than a sleek appearance. They enabled the design team to move the terminal 600 feet closer to the GCP. This approach, on which HOK collaborated with Vantage Airport Group, allowed for the construction of two additional miles of aircraft taxi lanes that will reduce airport ground delays.

The team designed a simplified and intuitive circulation network comprising over eight miles of new roadway and 20 new bridges that provide an effortless connection from the airport to the GCP and New York City. This sophisticated roadway network becomes part of the overall airport aesthetic. The roadways in front of the headhouse frame the GCP, and its column structures align with the headhouse design to provide one cohesive visual.

“The architectural design of the new Terminal B is second to none. We’re excited for our guests to enjoy both the striking visuals this new terminal offers as well as the innovative concepts that improve passenger flow, comfort and the overall experience for travelers,” said Stewart Steeves, chief executive officer of LaGuardia Gateway Partners. “As we move into this new era of history for LaGuardia’s Terminal B, we’re grateful to our partners HOK and WSP for creating an aesthetic worthy of the great design history of New York.”

“LaGuardia Airport is one of New York City’s most significant civic buildings. Reconnecting the experience and quality of this airport with its extraordinary city was the prime focus of our design work at LaGuardia Terminal B,” said Carl Galioto, FAIA, HOK’s president and New York office managing principal. “Our design concept focuses on two main components: a superior passenger experience and an exterior architectural expression that conveys a civic presence from the Grand Central Parkway. The building is a metaphor for New York, a city of islands and bridges, and the terminal is connected to the city with views of the skyline from the passenger bridges. Our ambition was to help transform LaGuardia into an airport with a distinct civic identity worthy of this metropolis.”

“In addition to the building itself, LaGuardia’s new and improved roadway network is unlike any other, in that it was designed from the beginning as a critical feature of the overall airport terminal aesthetic,” added Bernie McNeilly, WSP USA’s chief operating officer for transportation and principal-in-charge of the project. “Even before passengers arrive at the terminal, they will get a satisfying sense that things have changed for the better here and will set in motion a more pleasant, comfortable travel experience. It provides New York with a world-class facility that balances beauty, design and function, and leaves those visiting or traveling through the city with a positive and memorable impression.”

The new Terminal B treats arrivals and departures with equal emphasis. This challenged the widespread practice among airports of offering the most monumental spaces to departures while relegating low-ceilinged, basement-like zones to arrivals. At LaGuardia’s new Terminal B, incoming and outgoing passengers will share soaring, airy, grand-scaled sequences.

WSP designed the roadway network to accommodate current and future transportation demands, evolving transportation mode shifts and accessibility in a constrained landside environment. It consists of precast bulb-tee beams spanning to cast-in-place concrete piers and multi-span continuous steel girder bridges with one- and two-level roadway structures. The construction phasing strategy enabled continual operation of the existing airport while seamlessly shifting to the new infrastructure as construction was completed.

Inside the terminal, all check-in and passenger screening areas are located on the third floor. As needs change, this location will give Terminal B the adaptability to accommodate evolving security screening and technology. Instead of providing rigid parameters for each of its airline tenants, the ‘common-use’ design allows airlines to move easily within the terminal, expanding or shrinking their footprints within the terminal.

The sustainable design strategies in the new Terminal B, which is targeting LEED Silver certification, include generous use of non-glare daylighting, passive shading, natural local materials and storm resiliency. The efficient new infrastructure and layout will reduce the airport’s overall carbon footprint due to lower fuel demands from taxiing aircraft.

LaGuardia Gateway Partners was selected by the Port Authority of New York and New Jersey to deliver an extensive capital redevelopment project at LaGuardia Airport’s Terminal B that will provide world-class terminal facilities and operations for passengers and airlines.