Mercedes-Benz Stadium is iconic because Arthur Blank, his team and the design team members were willing to dream big and break the mold. We all were passionate about the idea that cities and fans deserved more from their sports venues—and that the building itself could add to the thrill of the action inside.

The kinetic, retractable roof at Mercedes-Benz Stadium is pure innovation. It has eight triangular petals that rest on 16 tracks. They appear to rotate as they open, but that’s an optical illusion. Air-inflated PTFE pillows cover each petal structure. The way sunlight passes through the oculus in the Pantheon’s roof inspired us. The roof challenges us to think differently about the impact of design—and the power of sports architecture–on the human experience. It provokes and inspires. It suggests that we can establish new norms if we’re ready to look beyond what has always been done. This was North America’s first LEED Platinum-certified professional sports stadium. It received the highest LEED score ever for a sports venue. Again, Arthur Blank challenged the team to push the boundaries of what was feasible and create the world’s most sustainable stadium. It starts at the top. This project influenced a movement toward greening our sports facilities and ensuring they give back to their communities. Energy and water conservation methods, as well as waste reduction programs, have lowered operating costs. More than 4,000 solar panels on the site generate enough electricity to power 160 Atlanta residences. A 680,000-sq.-ft. cistern beneath the stadium protects the neighborhood from flooding and reuses rainwater to irrigate local trees. The “window to the city” on the stadium’s west side is more than 16 floors tall. The floor-to-ceiling views of Atlanta’s skyline are spectacular. ETFE, the same translucent material used in the roof petals, provides visual connectivity and natural light while supporting ambitious sustainability goals. In 2022, most fans expect their venues to be environmentally friendly. We’re proud that this project helped set that expectation.

The stadium has been a great neighbor in Atlanta’s Westside. They have hosted more than 300,000 COVID-19 vaccinations, blood and food drives, as well as early registration and voting. They have given back to the neighborhood through training and hiring programs, a partnership with Big Thought and STEAM-based investments in youth, the Home Depot Backyard public green space and countless financial contributions. This is a testament to an ownership group truly committed to the community. 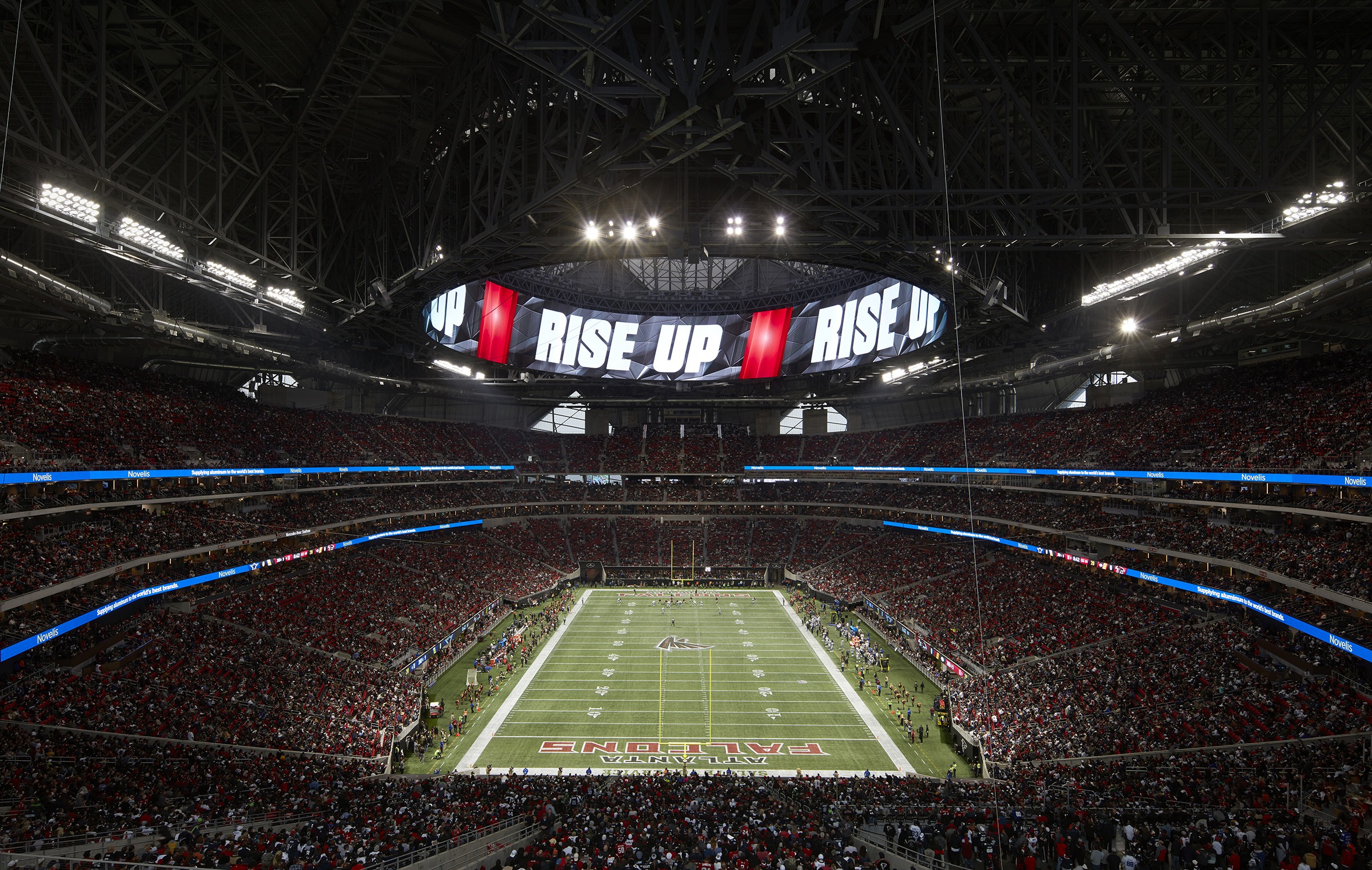 This stadium has the world’s first halo video board. The story of the video board begins with the retractable roof. We based its size and geometry on the roof opening, creating a halo form that feels integrated into the stadium architecture. At the time, it was three times larger than any other video board in the NFL, spanning 58 feet high and 1,075 feet long. It immerses fans in a theater-in-the-round experience and serves as a canvas for many forms of digital media. It has since been emulated in new stadiums.

There is also a 101-foot-high mega column that, in 2017, was bigger than the main video displays at most other stadiums. One primary goal was to alter the entire experience of going to a game. We thought strategically about the social experiences we could create for fans—what we could do to entice them to leave the couch or the sports bar and come to the games. Along with the iconic architecture and cutting-edge technology, we provided various seating options at different price points. The 100 Yard Club is a row of concession stands bookended by bars that runs the length of the field. Open concourses allow people to move through the entire stadium easily. For the opposing team, the steep end zone seats create an intimidating wall of fans.

The stadium opened with the NFL’s lowest food and beverage prices. In addition to the fan-friendly pricing, the stadium was the first NFL and MLS stadium to implement a complete cashless transaction model.

5. Flexibility for the Future The stadium is scalable to host different events. It can be easily reconfigured to accommodate games for the Falcons and Atlanta United, as well as events like the 2026 FIFA World Cup, Super Bowl, NCAA Men’s Basketball Final Four, the College Football Playoff National Championship and concerts. Retractable seats around the field and a motorized curtain system allow soccer fans to get close to the action.

The stadium’s digital platform for signage and advertising was novel at the time but is now becoming standard practice. They can display custom content for each event or sponsor.

Arthur Blank and his team approach this stadium as if it were a living, dynamic building. Though they have hosted over 250 events, they understand that they must keep innovating and modernizing it to remain the world’s premier venue. They’re now deploying a 5G network. The timeless design and flexible, high-tech infrastructure will allow them to make the stadium whatever fans want it to be.